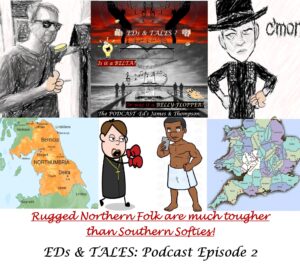 AVAILABLE FROM MOST DIRECTORIES including

Hear about the struggles of rowing champions of old. The stars of music-hall. A rigged football match between toffs and serfs. Bare knuckle, contests battling for supremacy, as well as the cultural and industrial development; north and south of the great North East divide.
Tales from a Glasgow off licence and the strange goings on around London Bridge and the Bow Bells
– A fabulous rendition of Cockney Rhyming slang from international film and radio star Richard Sirot and memories of his films with Michael Caine and Michael Winner
– Three songs and a poem, from award winning actor and singer, Jamie Brown
– Two dedicated poems from Heather (the rhyme) Bell – Poet and raconteur
– A rendition of the Lambton Worm by Ruth Lambert, Jazz singer and recording artist
– A double obituary from Ed (Mr Cheerful) Thompson
– Northern Muscle Blues – a song by Ed James

The finale is a specially staged boxing match between AnthKnee Joshwah and The Bishop of Durrum, for the unified, Heavyweight Boxing Championship of the World, with vignette’s from James Brown and Mohamed Ali
Cameo’s from Jason Stray-thumb, Vlad’s Poo-tin and Klinch-co and Slyman Cowl

Join us to learn the panel’s conclusions.

Music from Ed James Music/ EDsJamesAndThomspon
– They Called it the Village –  This Sweet Life of Mine – Don’t Throw This Away – The Great Geordie Song Smiths.
https://edjamesmusic.co.uk/discography/

Sponsored by Muscles UnLimited – purveyors of she shells, sold on the sea shore.